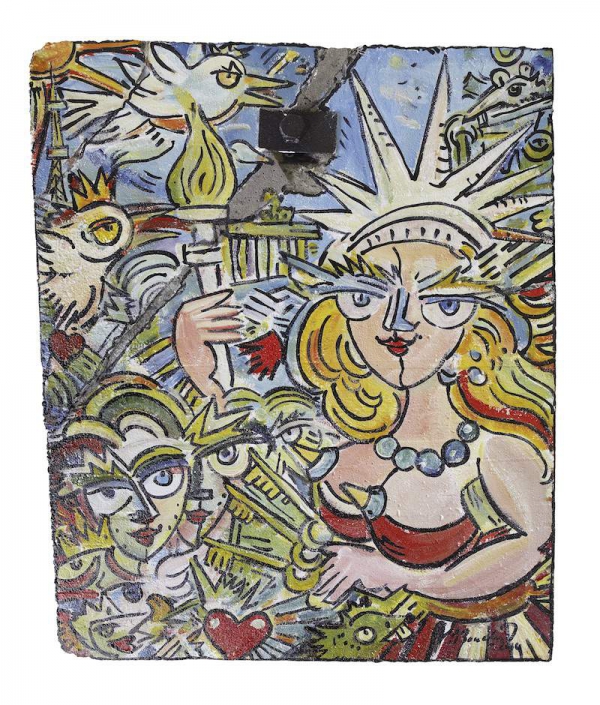 Christophe Bouchet had a hearing impairment from birth and never attended primary school; instead, he learned reading and writing at home, with his mother.

From 1976 to 1979, he attended the École des Beaux-Arts in Toulouse, Bordeaux, and Paris. He completed his studies with a concern for aesthetics, but also came away with a critical stance with regard to society.

He moved to West Berlin on 24 December 1980. In April 1984, he and Thierry Noir began painting the Berlin Wall at Mariannenplatz, Potsdamerplatz, and Checkpoint Charlie: “We didn’t want to decorate the Wall, it was more of a physical reaction against the inhumanity of life along the Iron Curtain.” He would leave an indelible pictorial memory there, as achieved by very few artists before him.

On 4 July 1986, at Checkpoint Charlie, he and Thierry Noir painted forty-two Statues of Liberty in honour of the centennial of the installation of Bartoldi’s statue in New York.

His unconventional approach to painting and the spontaneity of his Berlin creations have placed him in the avant-garde of street art.

In November 1987, he also is the first artist in the history of the Berlin Wall to have painted the Wall on its eastern side, by pouring paint through a crack he had sawed into the concrete!

Christophe-Emmanuel Bouchet splits his time between his studio in Düsseldorf and one in Chenonceau – where he has transformed the town’s former train station into a work of art. He considers himself a citizen of the world.

Keys, locks,
his paint traverses the wall
he was there
when freedom began.